Release and Making of the Film #TitleDefense

A long way back, in May 2015, Team Paddy Murphy attended (and won) the rally Strade del Vino 2015 in Piedmont. After days of hard work, Paddy finally finished making the film and decided to share his superior knowledge of film making and the immense experience gained from creating movies. If you're not interested in a look behind the scenes of Paddy Murphy Studios, or if you can't wait to see the finished film, go on and click here. Paddy does not blame you (just kidding, of course he does!). 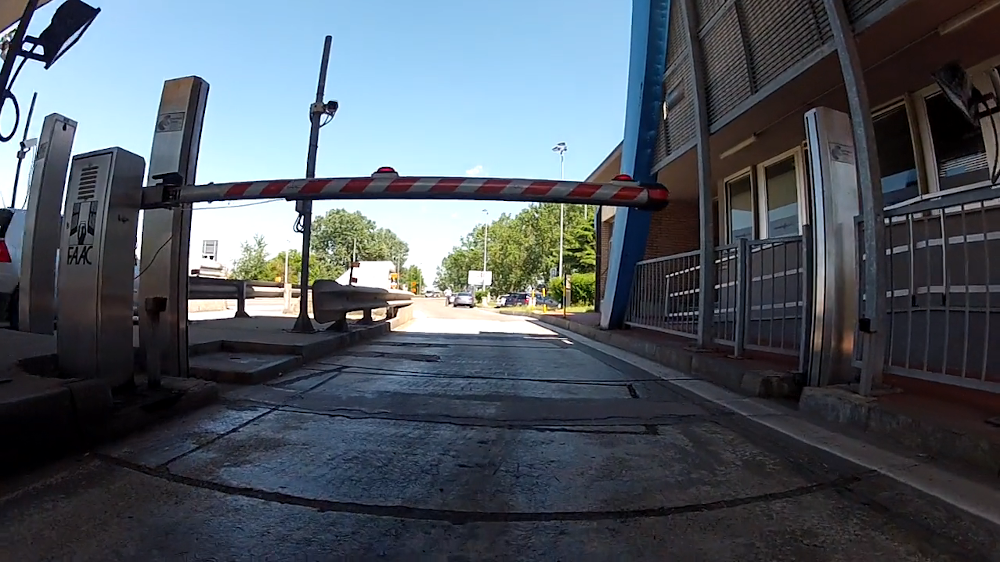 The rally lasted three days plus an additional prologue day. Paddy tried to record the whole event and was quite successful doing that. Paddy recorded in total 14 hours, 23 minutes and 43 seconds of driving around Piedmont. That results in 27 files with a file size of 65.4 GB.

Paddy started watching the recordings a week after the rally and he made notes of interesting scenes (timestamps, duration, small description). Paddy classified all noted scenes in different categories such as People, Regularity, Cars, Decisions, Driving (1 to 3), Point of interest, 911 vs. Capri, Acceleration. This helps Paddy to cut the film afterwards and to develop a story later on. Sometimes it was boring and exhausting to watch the rally all over again. So it took Paddy around a month to watch and categorise his recordings.

Paddy began working on the recordings based on his notes at the end of June. He had around four hours film material and 189 unique scenes left after the first cut. Over the next two months Paddy sat down four more times to watch the scenes over and over again. He decided which scenes are interesting, show something important or fit into the storyline (this was quite a challenge, because Paddy had no story at this time...). At the end of the process, there were 57 scenes left with a total length of 37 minutes. Paddy's goal is to make a film with a length of ten to twelve minutes, so there was still work to be done. But first let's have a look at that progress over time.

The first chart shows the amount of scenes in each category over time: 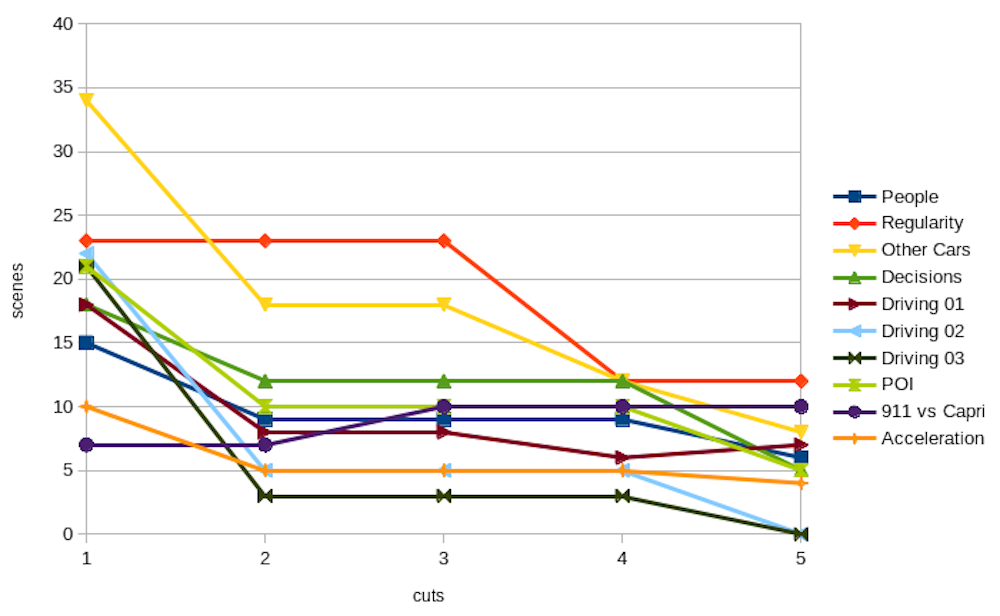 The second chart shows the length of scenes in each category over time:

Paddy had to throw away two-thirds of the scenes to achieve his goal of a ten minute film. However all of those scenes are brilliant in their own way, not only because they survived five cuts), so this was a hard work to do. Besides, Paddy had to develop a storyline and had to figure out how to accompany his story with music. The following screenshot of the video editing software OpenShot gives an insight into that step. You can see the different categories and scenes. Paddy has to put together the best scenes to tell his story. 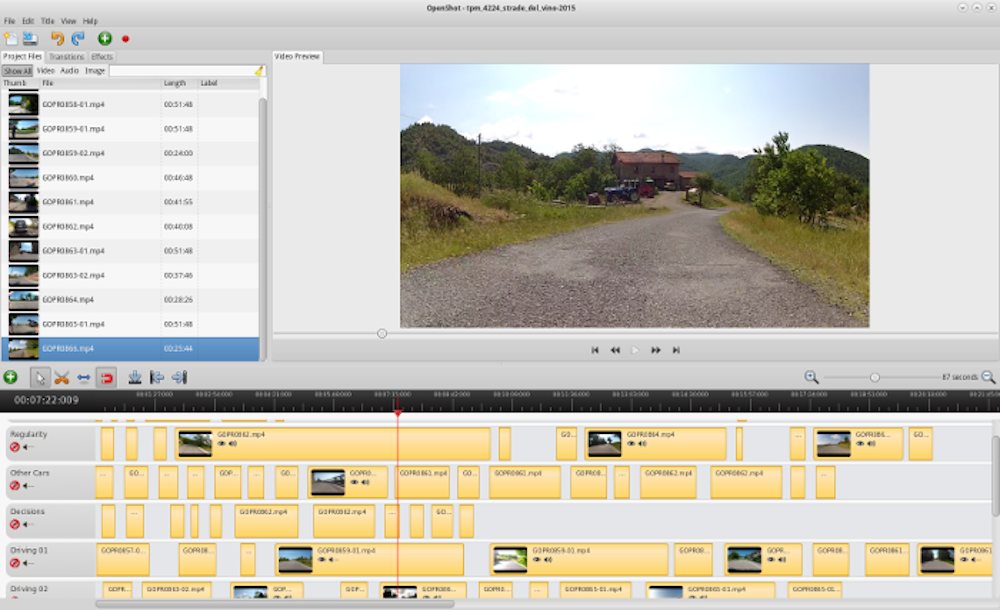 But Paddy had problems with finding a great story for the film. He quickly had some ideas such as the chapter The Hunt of Porsche 911, but the big picture was missing for a long time. The missing story led to a lack of motivation and as result Paddy needed a long time to finish it properly. But then on a rainy day, Paddy sat down for a few hours and all of it came together so nicely. First he made the intro with song about the Irish football team and then he decided to do a similar story as in the 2014 film of Strade del Vino, but skip some parts (like the regularities).

Paddy finished the first draft in October. It was rough around the edges, but the film script was finally completed. Paddy needed another week to polish it till it shines and was ready for release. After he exported his film project out of OpenShot, Paddy has to encode the original film format into HTML5 compatible formats. But this is a tale for another time.

The film starts at a toll station on the Autostrada A26 near Alessandria. The music in the background is the song The Boys In Green by Dublin City Ramblers. They performed this song for Ireland's world cup 1990 in Italy. And it fits perfectly for Team Paddy Murphy at a rally in Piedmont. The film shows nice roads in Piedmont and as you can see Paddy enjoyed driving there. The chapter The Hunt for Porsche 911 is about a trial of strength between Henry and a 1977 Porsche 911 Targa. Three days long they chased each other, and the duel is not settled for good.

On Day 2, after an unsatisfying result in a regularity near the hotel, Paddy headed to a petrol station to fill up Henry. The road was small and other cars were waiting to start their regularity run. Paddy had to drive into a ditch beside the road to give way for the others. For once, Paddy was able to get out all by himself. 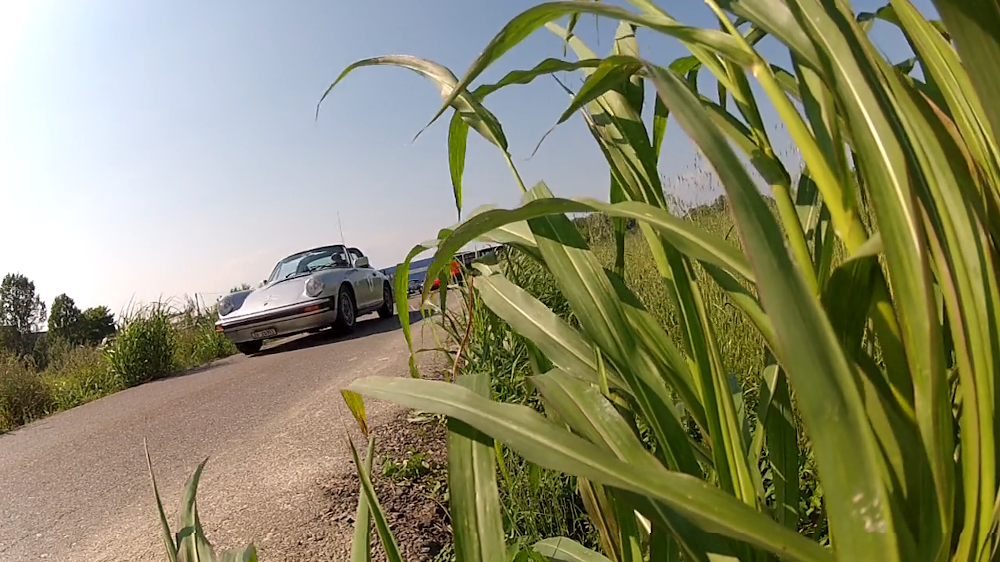 Villa Botteri was written on a well hidden sign - well, it was possible to spot it on closer inspection - during the course on Day 01. Most of the team missed that sign and drove into a wrong direction. Team Paddy Murphy spotted the sign, because for once, they drove slowly and cautiously, and therefore headed into the right direction. They started the race as 18th car and were the first to arrive at a regularity checkpoint later on. 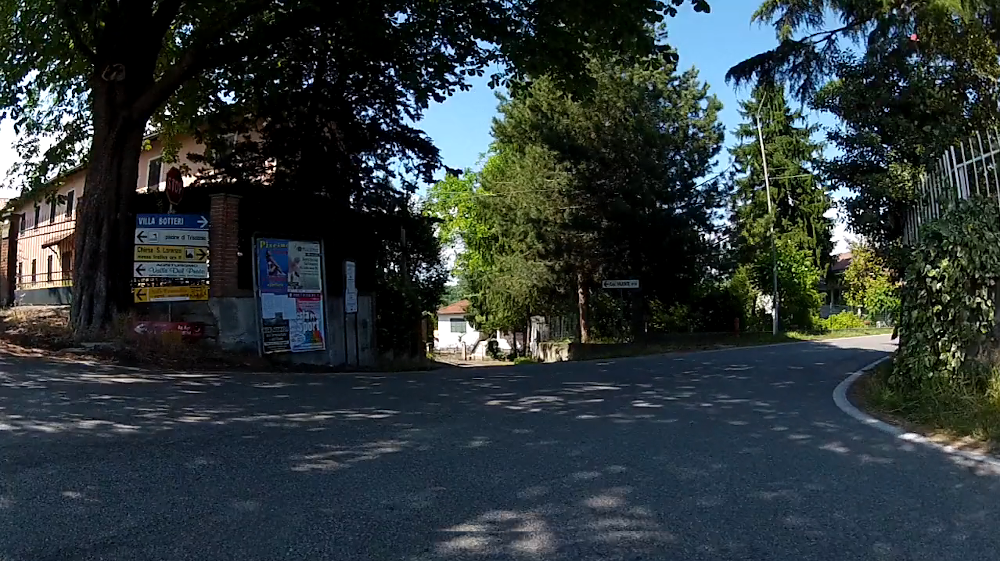 By the way, the film is named #TitleDefense because Team Paddy Murphy won the rally already in 2014 and before the 2015 edition started Paddy used this as a hash tag in a tweet on the evening before the prologue. As it happened it was a good omen.